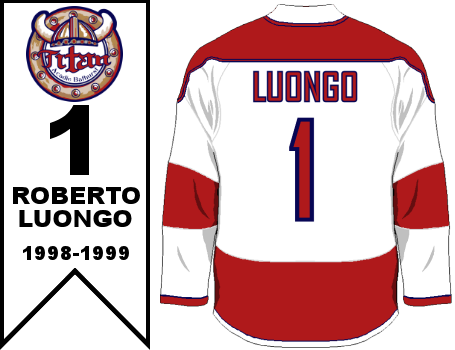 ROBERTO LUONGO came to Bathurst during the 1998 Winter Trade Period from the Val-d’Or Foreurs while he was representing Team Canada at the World Junior Hockey Championship. Drafted second overall in the 1995 QMJHL Draft by the Foreurs, Luongo was brought in with the pedigree of having won the President’s Cup with Val-d’Or the previous year. In 22 regular season games with 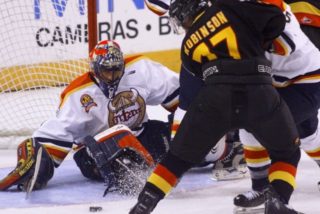 the Titan, he would go on to record 14 wins and seven losses with one tie. He would go on to post an additional 16 wins with six losses in 23 playoff games, back-stopping the Titan to the first President’s Cup to be won by a team based in the Maritime Provinces.

After wrapping up his junior career, Roberto would go on to split his first professional season between the Lowell Lock Monsters (AHL) and the team that drafted him fourth overall in the 1997 NHL Entry Draft, the New York Islanders. The next season, he would find himself traded to the Florida Panthers where he would play the next five seasons before relocating to Vancouver to play parts of the next eight seasons with the Canucks where in 2011 he was named the recipient of the William M. Jennings Trophy for the league’s best goaltender. Most recently during the 2013-14 season he would find his way back to the Panthers where he continues to play today. In 926 career NHL games, Roberto has 436 wins, 350 losses, 33 ties and 78 overtime losses. In addition to this, he has racked up 66 shutouts to go with a 2.49 goals against average and a 0.919 save percentage.

Roberto’s international career representing Canada has been quite successful and includes two Olympic gold medals (2010 in Vancouver and 2014 in Sochi); Two gold (2003 and 2004) and one silver (2005) at the IIHF World Hockey Championship; Gold at the 2004 World Cup of Hockey; and a silver medal at the 1999 IIHF World Junior Hockey Championship. 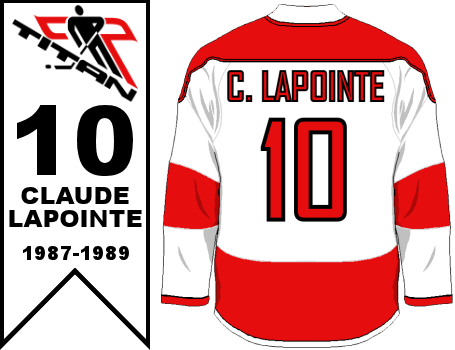 CLAUDE LAPOINTE played four seasons in the QMJHL (1985-86 to 1989-89). His first two years were spent with the Trois-Rivières Draveurs. Lapointe joined the Laval Titan in his third season and won the President’s Cup in his last season in an exciting 7-game series against the Victoriaville Tigres. In his four years in the QMJHL, he played 309 games (playoffs included)

Lapointe was drafted by the Nordiques in the 12th round of the 1988 NHL Draft. In his NHL career (1990-91 to 2003-04), Lapointe has played for the Quebec Nordiques, Colorado Avalanche, Calgary Flames, New York Islanders, and Philadelphia Flyers. He spent most of his NHL career with the New York Islanders, from 1996–97 to 2002–03. While with the Islanders, he received three Bob Nystrom awards, representing the player who shows the most leadership, hustle, and determination. 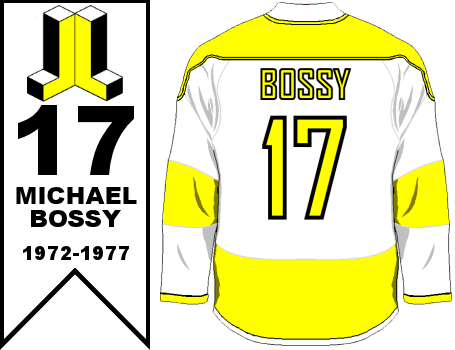 MICHAEL BOSSY played 5 seasons in the QMJHL with the Laval National (1972-73 to 1976-77), scoring an impressive 309 goals and 223 assists for 532 points (playoffs included). His offensive talent made him a hot commodity at the 1977 NHL draft where he was picked 15th overall by the New York Islanders. 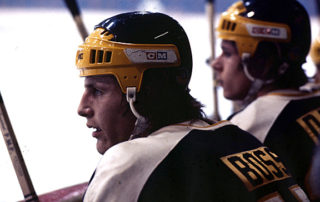 Before his NHL rookie season Bossy boldly promises that he will score 50 goals… He scores 53, a record for rookies at the time. He becomes the first player since Maurice Richard to score 50 goals in 50 games, a feat accomplished during the 1980-80 season. Bossy is an important component to the New York Islanders dynasty that wins four straight Stanley Cups in the early 80’s, picking up the Conn Smyth trophy (playoff MVP) in the 1982 playoffs.

In his ten-year NHL season, all spent with the Islanders, Mike Bossy played in 881 games (playoffs included) scoring 658 goals and adding 628 assists for a total of 1286 points. 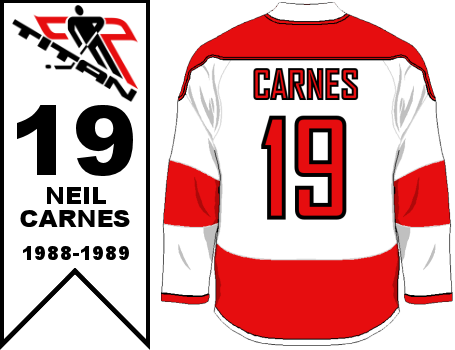 NEIL CARNES played three seasons in the QMJHL (1986-87 to 1988-89). In his third year, he was traded from the Verdun Junior Canadiens to the Laval Titan where he won the President’s Cup.

Drafted in the 3rd round (46th overall) by the Montreal Canadiens in the 1988 NHL entry draft, Carnes never got the chance to play in the NHL. He died in a tragic motorcycle accident shortly after the 1989 Memorial Cup Tournament. 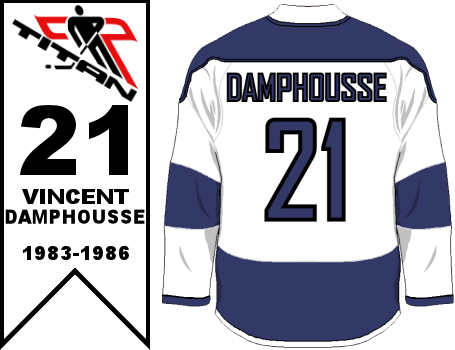 VINCENT DAMPHOUSSE played during three seasons in the QMJHL (1983-84 to 1985-86) with the Laval Voisins and the Laval Titan. He won the league 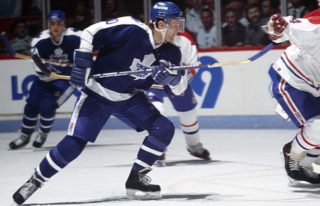 Drafted 6th overall by the Toronto Maple Leafs in 1986, Damphousse had a successful 18-year NHL career (1986-87 to 2003-04) with Toronto, the Edmonton Oilers, the Montreal Canadiens where he won the Stanley Cup in 1993 and the San Jose Sharks. 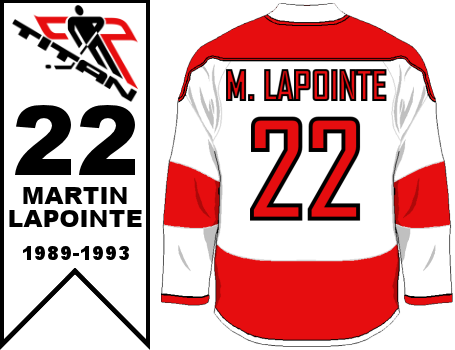 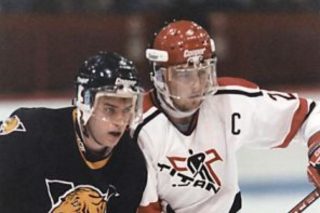 stage playing in three straight World Junior Championships, winning twice with Team Canada in 1991 and 1993. He led team Canada with 9 points in 7 games en route to his second championship and is one of the rare players to win both the World Championship and his league title in the same year.

Drafted in the first round (10th overall) in the 1991 NHL entry draft by Detroit, he joined the team’s AHL affiliate in Adirondack in the 1992 and 1993 playoffs and started his NHL career with Detroit the following season. Stanley Cup winning seasons followed suit in 1996-97 and 1997-98. Lapointe has since played with the Boston Bruins and the Chicago Blackhawks. He is now a member of the Ottawa Senators. Up to the 2007-08 season Lapointe has played 1186 games in the NHL, scoring 258 and adding 266 assists for 524 points. 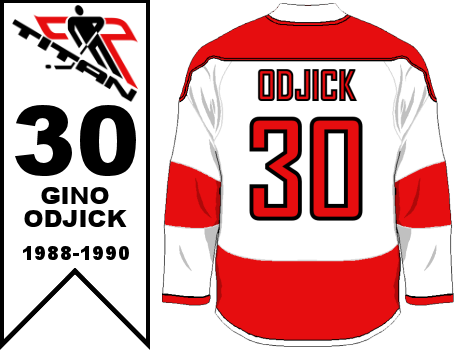 GINO ODJICK joined the Laval Titan in 1988-89 with a direct intent : protect his bretheren. He quickly became a player you had to reckon with. His team mates, including Donald Audette, Denis Chalifoux, Claude Lapointe, Pat Caron, Patrice Brisebois and Co. could allow themselves some latitude on the ice knowing Odjick was in their camp.

Even with his documented toughness, Odjick can still be a menace on the score sheet, with 27 goals in 130 QMJHL games during his two-year stay with the Titan. But his goal total isn’t the dominating stat: 27 goals and 55 assists for 82 points, and 797 penalty minutes. 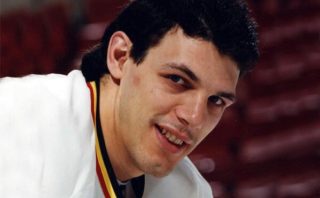 During his QMJHL stint with the Titan, Odjick wins the President’s Cup twice. In the 1989-90 championship year, Odjick teamed up with Sandy McCarthy, Michel Gingras and Claude Boivin to terrorize opposing players. The Laval Colisée was nicknamed the “House of Pain”, this for obvious reasons.

Odjick is drafted by the Vancouver Canucks in the 5th round of the 1990 NHL draft and will spend 8 years with the organization, quickly becoming a fan favorite at pacific Coliseum. In his first NHL game, he fights three times against the Chicago Blackhawks. One of those times is against the “Grim Reaper”, Stu Grimsom. His message is clear: “I’m here to stay”.

That being said, the bulk of his work is actually done off the ice. A full-blooded Algonquin, Odjick spends much of his free time with kids talking to them about the dangers of substance abuse. His extensive work promoting the hazards of substance abuse is well documented.

In 1991, Pavel Bure signs with the Canucks and both, interestingly, become friends. They invested some time teaching each other’s “gifts”. The results: Odjick scored 16 goals in 1993-94 and Pavel Bure doesn’t back down anymore. In a particular instance, Bure knocks out Dallas Stars Shane Churla.

Odjick also spent time with the New York Islanders, Philadelphia Flyers and Montreal Canadians. In his NHL career, he plays 679 games, scores 77 goals and has 78 assists for 155 points… and he picks up 2851 penalty minutes. 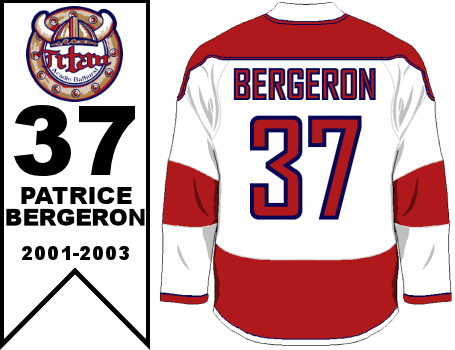 PATRICE BERGERON joined the Titan organization in 2001 after being drafted in the fifth round of that year’s QMJHL Entry Draft. Playing a total of 74 games with the Titan, he scored 23 goals and added 51 assists over parts of two seasons. His performance in the 2002-03 season captured the attention of the Boston Bruins who drafted him in the second 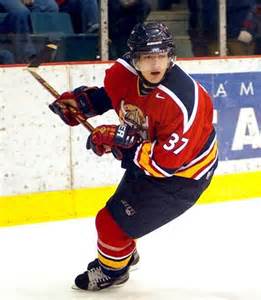 round of the 2003 NHL Entry Draft and make the Bruins’ opening day roster as an 18-year-old.

Having spent his entire NHL career thus far with the Bruins, Patrice has helped the Bruins reach the Stanley Cup Finals twice in 2011 and 2013, winning the championship in 2011. During his 10-year NHL career, Bergeron has won a number of awards including the Frank J. Selke trophy three times, the King Clancy Memorial Trophy and the NHL Foundation Player Award. To date, Patrice has played 820 NHL regular season games, scoring 238 goals and adding 380 assists. 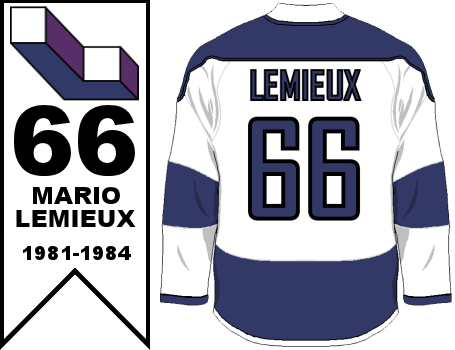 MARIO LEMIEUX is arguably the most dominant player to have played in the QMJHL. In 244 games over three seasons (playoffs included), he scores 295 goals and has 365 assists for 660 points. In perspective, that is equivalent to 1.2 goals and 2.7 points per game. In his last season with the Laval Voisins, Lemieux beats the single-season record for goals held since 1971 by Guy Lafleur. Lafleur had scored 130 goals. Lemieux makes it to 133. His 282 points record, established in 1983-84, still stands today and will for a long time to come.

During the 1984 playoffs, Lemieux scores 29 goals and adds 23 assists for 52 points in only 52 games to lead Laval to the QMJHL championship. He maintains an average of 2.07 goals scored and 3.71 points per game in the series, earning playoff MVP honors in the process. 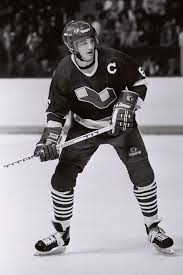 The individual honors at season’s end is representative of his dominance:

It is only the beginning for Mario Lemieux.

His NHL career begins on October 11th 1984 against the Boston Bruins. He scores on his first shot in the NHL against the Bruins’ Pete Peeters. Lemieux finishes his first season with 100 points (43-57-100) and wins the Calder Trophy as Rookie of the year. This sets the stage for a remarkable pro career. Lemieux literally saves the Pittsburgh team twice: the first as a player where he rejuvenates a seriously ailing franchise and the second time as the team’s owner.

In international play, Lemieux wins the Canada Cup in 1987, the gold medal at the 2002 Olympics in Salt Lake City and the World Cup of Hockey in 2004.

Mario Lemieux also wins the challenge of his life. In January 1993, he is diagnosed with Hodgkin’s Lymphoma, a serious form of cancer. His career and his life is in potential peril as he undergoes two months of aggressive radiation therapy. On the day of his last radiation treatment, Lemieux flies to Philadelphia to play against the Flyers. He scores once and assists once in a 5-4 loss. But the Flyers faithful give him a rousing ovation, a rare feat for an opposing player in Philadelphia.