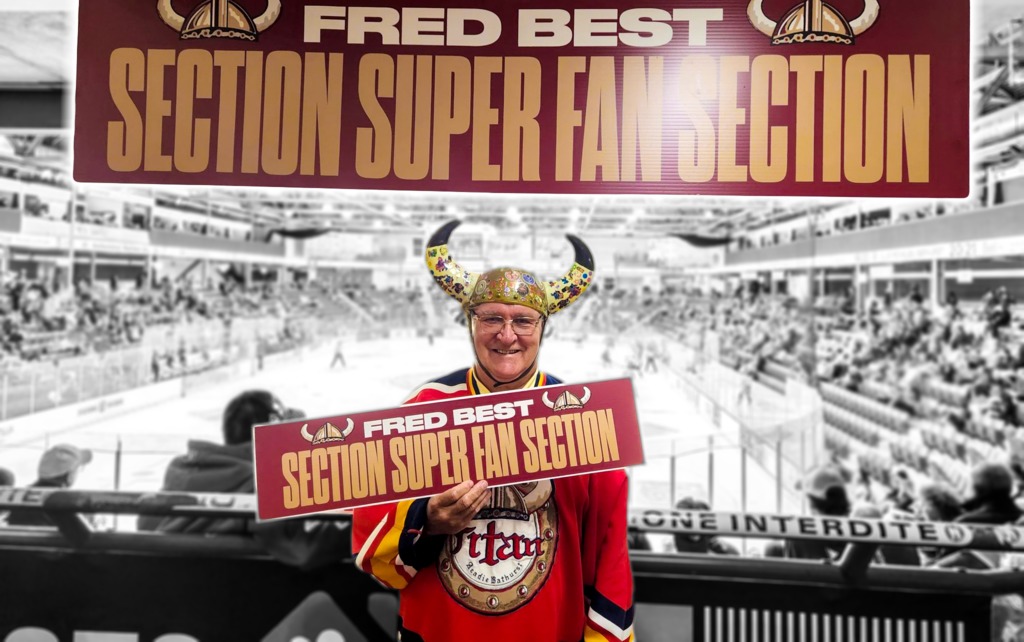 BATHURST, N.B. – For more than two decades this Superfan has been a staple at our Acadie-Bathurst Titan home games. He’s one of the biggest supporters of the team since it moved to Bathurst in 1998, whether it’s cheering loudly from his seat in Section 24 to travelling across Quebec and the Maritimes to support his Titan. Fred Best is simply, part of the Titan family and the fabric of the organization.

His Viking-like helmet – one which resembles our original team logo – tells its own story of his devotion to the major junior squad. Each sticker connects a map of travel, dedication and loyalty to the Titan. It’s a love letter of his support, pride and belief in his hometown team.

At the K.C. Irving Regional Centre players skate for the smallest market team in the Canadian Hockey League, but with the biggest, most energetic and faithful fan supporting them from the stands. While you can spot him wearing his Viking helmet in the rink, he also wears a couple of other hats. In 1999 he won the Most Priceless Fan in the CHL Award and was named the Titan Volunteer of the Year award in 2019.

Sunday night as we celebrated our home opener in front of our amazing community, we recognized Fred Best as a life-long ambassador and friend of the Acadie-Bathurst Titan. Section 24, where Fred’s sang, danced, and cheered for decades, was officially named the Fred Best Superfan Section.

“Fred Best has been an iconic fan of the Titan in the Acadie-Bathurst region since the very beginning. In addition to being extremely entertaining, he is a very unifying person,” said Titan Director of Marketing, JD Boudreau. “He is always willing to help in all our projects and is an ambassador. He has certainly left his mark on thousands of players, employees, and fans over the past 25 years.”

It is an honour and a privilege for us to call Fred Best our Superfan and friend. Thank you for everything you do Fred. We cannot wait to cheer on his team from his favourite spot.