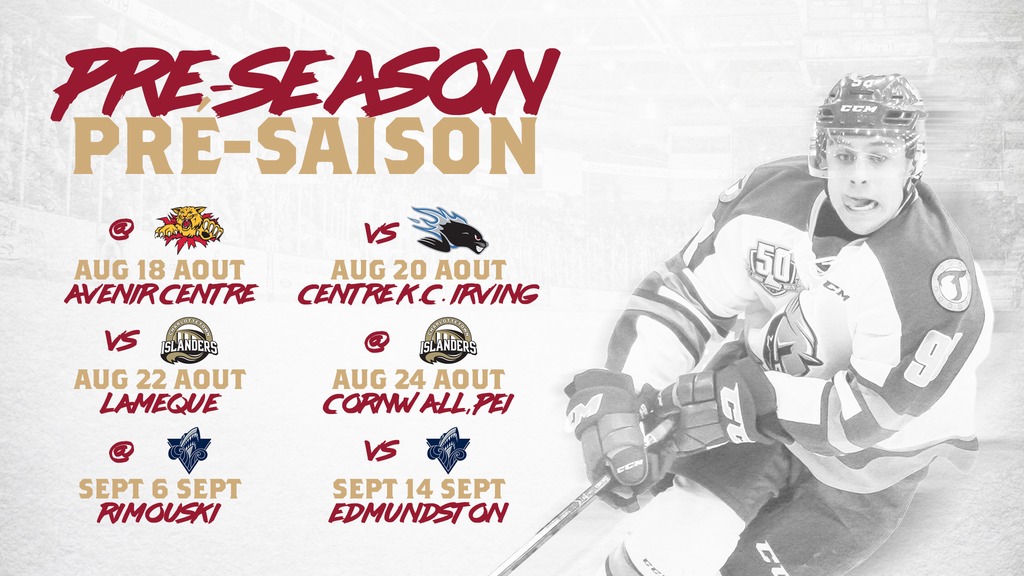 BATHURST – The Acadie-Bathurst Titan today announced their 2019-20 pre-season schedule, which kicks off Sunday, August 18th (4pm) when they visit the Moncton Wildcats at the Superior Propane Centre. The team will play six pre-season games in preparation for the 2019-20 season, including three home games.

They return home to the K.C. Irving Regional Centre on Tuesday, August 20th (7pm) to battle the Saint John Sea Dogs. Admission for this game is free however donations will be accepted at the door with all proceeds going to Bathurst Chaleur Special Olympics programs. Two days later, the Titan travel to Lameque to welcome the Charlottetown Islanders to Aréna Des Iles on Wednesday, August 22nd (7pm).

The pre-season continues Saturday, August 24th (3pm) as the Titan travel to Prince Edward Island to take on the Islanders in Cornwall. After a two week break, they’ll head to Rimouski to battle the Oceanic on September 6th at 8:30pm. For the second year in a row, the Titan will conclude the pre-season in Edmundston. They face-off against the Rimouski Oceanic at the Jean-Daigle Centre on Saturday, September 14th (4pm).

Don’t miss opening weekend as your Titan battle the Cape Breton Screaming Eagles on back-to-back nights to kick-off the 2019-2020 season at the K.C. Irving Regional Centre. Among the festivities is Fan Fest which will be happening in the parking lot prior to both games with activities for the whole family. Tickets for both games can be purchased at the K.C. Irving Regional Centre box office, online at ticketboutik.ca, or by phone at (506) 549-3200.