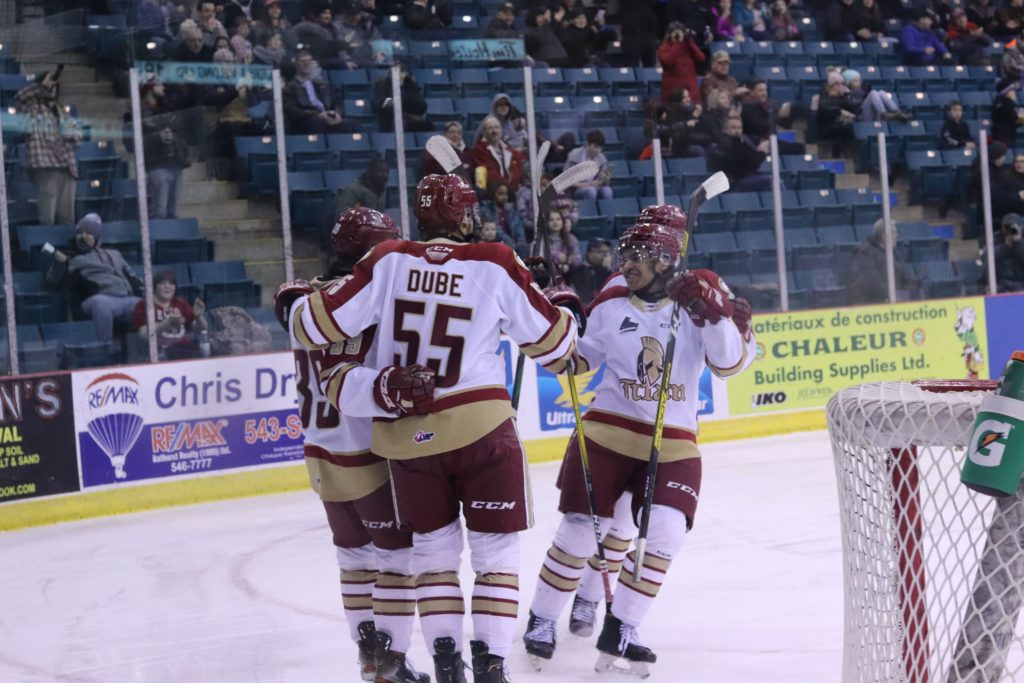 BATHURST – Four players had multi-point games and a total of 12 players registered at least one point as the Acadie-Bathurst picked up a big 6-2 win over the Halifax Mooseheads at the K.C. Irving Regional Centre Friday night. The win snapped a five-game losing skid for the Titan while the Mooseheads suffered their seventh loss in a row.

The Mooseheads got on the board first on a powerplay goal from Senna Peeters 4:24 into the game. After that the Titan were able to gain some momentum and eventually tie the game. David Doucet chipped the rebound of a Remy Anglehart shot over the goal line to even the game 1-1. Olivier Coulombe also picked up an assist on Doucet’s third of the season and teams went to the dressing room tied at one after 20 minutes of play.

Acadie-Bathurst carried momentum into the second period and took their first lead of the night 2:27 in. Yan Aucoin sent the puck cross-ice to Bennett MacArthur on a 2-on-1 and the Summerside, PEI product tapped it into the net for his sixth of the year. Three minutes later Cole Huckins received the puck near the goal line and drove the net, beating Gravel to extend the Titan lead on the powerplay. After two periods, the score remained 3-1 in favor of the home team. A very odd sequence 6:39 into the third period lead to a powerplay goal for Mathieu Desgagnes as the puck went off a Moosehead player and in making it 4-1. Halifax would get one back cutting the lead to two midway through the frame on a goal from Gavin Hart but that was as close as they would get.

Logan Chisholm restored a three-goal cushion for the Titan scoring on a rebound after a shorthanded scoring chance for Alexis Dube. Dube would get the lone assist on the goal at 11:47. Olivier Coulombe put the icing on the cake with 50 seconds remaining wiring a wrist shot off the far post and in to make it a 6-2 final score. Mathieu Desgagnes and Maxime Rioux notched the assists. Between the pipes Tristan Berube turned aside 33 of 35 shots.