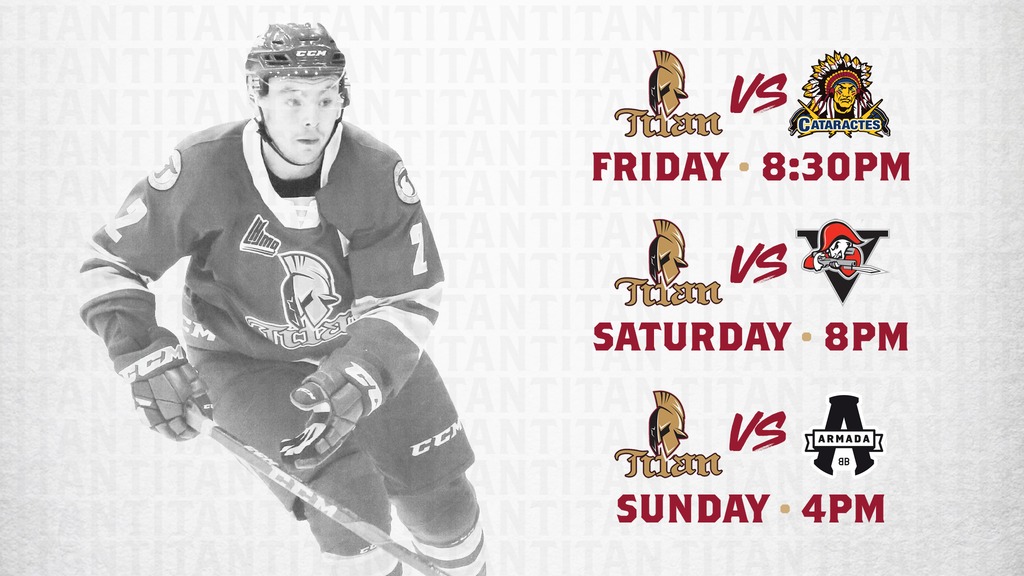 The Acadie-Bathurst Titan head out on their second last road trip of the season this weekend, as they get set to play three games in less than 48 hours during their final visit to Quebec.

The Titan, 11-38-5-4, are coming of a week that saw them suffer a trio of heartbreaking losses while picking up a gutsy win over one of the top teams in the Quebec Major Junior Hockey League.  That stretch also saw the club get points in their last three games, and come seconds away from making it four in a row, thanks to stellar goaltending from both Tristan Bérubé and Félix-Anthony Ethier as well as an impressive performance from forward Mathieu Desgagnés.

The week started with Desgagnés scoring a pair of goals in a 5-4 loss to the Saint John Sea Dogs at TD Station on Feb. 17.  Former Titan forward Anderson MacDonald came back to haunt his former team notching the game winner with just four seconds left in regulation time in the Family Day setback.

Acadie-Bathurst bounced back with a 4-2 win over the Cape Breton Eagles in Sydney, N.S. on Wednesday, before dropping back-to-back overtime losses to the Charlottetown Islanders on Saturday and Sunday.  Bérubé made 38 stops in Cape Breton while Desgagnés picked up the game winning goal along with an empty netter in the win.  Desgagnés continued his hot play on the weekend, scoring a pair of goals for the third straight game on Saturday, in a 4-3 loss to the Islanders at the K. C. Irving Regional Centre, then notched the lone goal for Acadie-Bathurst on Sunday in a 2-1 setback in the Prince Edward Island capital.  Desgagnés finished the week with seven goals in four games.  Bérubé, meanwhile, made 46 stops on Saturday, while Ethier had a 54 save effort on Sunday.

Here are the games coming up this week.

Shawinigan find themselves jockeying for playoff position with a half dozen teams that all entered the week separated by just two points in the overall standings.  Led by 17-year-old centres Mavrik Bourque (71 points) and Xavier Bourgault (33 goals), Shawinigan beat the Titan 5-3 in the only other meeting between the two clubs this season back on Dec. 1 at the K. C. Irving Regional Centre.

Saturday’s game will actually be the first meeting of the season between Acadie-Bathurst and Drummondville, with the two sides set face off again on March 6 in Bathurst.  Xavier Simoneau leads all scorers for the Voltiguers with 26 goals and 74 points.  His 48 assists have him tied for fourth overall in the QMJHL.

Wrapping up the weekend for the Titan is a matinee affair at the Centre d’excellence Sports Rousseau in Boisbriand, Que.  The Armada fought back from a two goal first period deficit to defeat the Titan 5-3 in the only other meeting between the two clubs this season on Jan. 26 at the K. C. Irving Regional Centre.