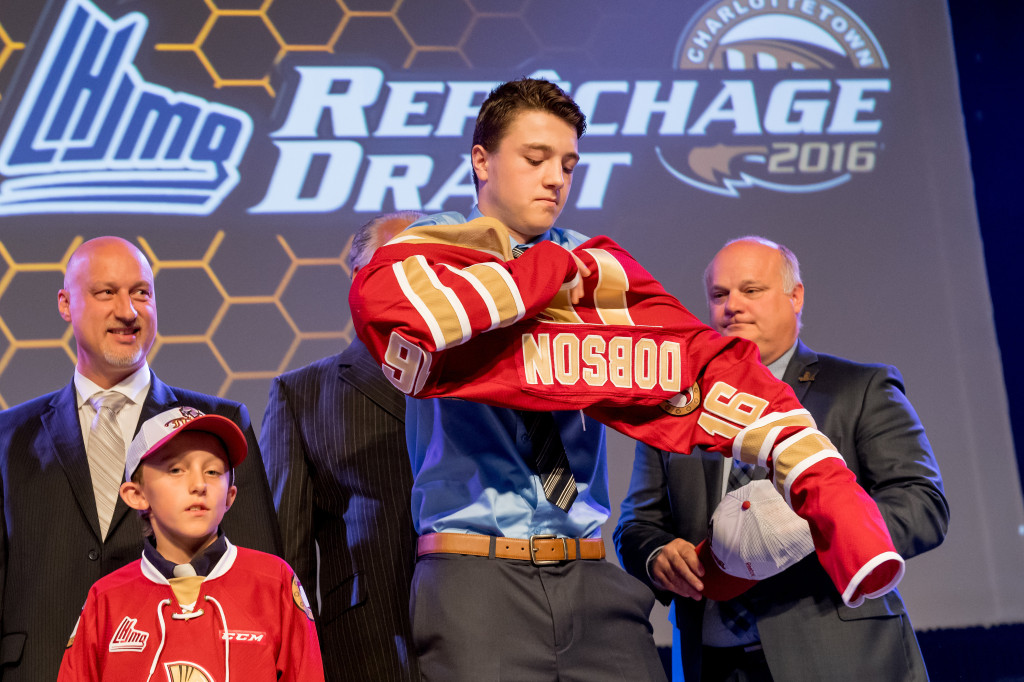 Bathurst, NB, June 4th, 2016 – It was Draft day in the Quebec Major Junior Hockey League and the Acadie-Bathurst Titan made a series of splashes through picks and trades.

The Titan are proud to select …

The Titan then used their newly acquired pick to select Noah Dobson (2000-01-07). A native of Summerside, P.E.I., Dobson spent the past season skating with the EC Red Bull Salzburg U18 and U20 teams. The six feet tall, left-shooting defenseman picked up a muscular 18 points in 35 games.

Carl Bouchard, Director of the league’s Central Scouting service, describes Dobson this way: “Noah is a terrific skater and is one of the most mobile defencemen in this draft. He is offensively gifted and has a heavy shot from the point. He will need to work on his defensive positioning in his own end, but Noah is fully capable of quarterbacking a power-play thanks to his great hockey sense.”

Interesting fact, even though Dobson was playing in Austria, another Titan prospect, Kynan Berger, was his roommate.

Rumors had been swirling all weekend, and finally it happened. The Titan traded 19 year-old defensemen Guillaume Brisebois (1997-07-21) and Jake Barter (1997-03-19) to the Charlottetown Islanders. In return, the Titan received the Islanders’ first round draft choice in 2018 and their second round pick in 2017, as well as veteran defenseman Luc Deschênes (1997-05-02).

Brisebois therefore completes his time with the Titan by having represented the team twice at the Subway Super Series and having been a third round selection of the Vancouver Canucks in the 2015 NHL Draft. A native of Mont-Saint-Hilaire in Quebec, the left shooting defenseman picked up 73 points in 175 games in the red and gold jerseys. Meanwhile, Barter only had time to get three points in 31 games with the Titan.

On the other side, Deschênes is a veteran acquisition for the Titan blue line. With a total of 57 points in 176 major junior hockey games, the five foot, eleven inches blue liner helped guide the Islanders to a second round playoff appearance this past season.

The Titan wish to thank Guillaume and Jake for all of their contributions to the team and wish them the best in their future endeavors. Simultaneously, the Titan wish to welcome Luc, the newest defender of the Bay!

Olivier in the third round

With their third round selection, the Titan selected left shooting defenseman Nicolas Olivier from the Levis Commanders. Already possessing an impressive frame at six foot two and 163 pounds, Olivier was originally ranked as the 29th best prospect by Central Scouting. With the Titan grabbing him 42nd overall, he may very well prove to have been a steal.

With two fourth round draft choices in hand, the Titan traded their first one, the 61st pick overall, along with their 2017 second round draft selection to Chicoutimi in exchange for forward Jonathan Bourcier (1996-11-17).

Bourcier had a stellar 2015-16 campaign with the Saguenéens, scoring 30 goals and adding 44 assists in 66 games. Skating on the right wing, Bourcier should be an excellent addition to the Titan offense.

Then, with their second fourth round pick, the 70th overall, the Titan’s hockey personnel landed their choice on Max Walford (2000-04-24), a goaltender from Cole Harbour, Nova Scotia. Ranked as the 61st best prospect, Walford strapped on the pads with the Cole Harbour Major Midget team, no small task for a 15 year-old netminder.

De Luca in the fifth

In the seventh round, with the 118th pick overall, Charles-André Cypihot (2000-12-15) became the newest member of the Titan. One of the youngest players in the draft in spite of his six foot two, 177 pound frame, Cypihot played for the Georges Vanier School U17 team, with which he scored 31 goals and added 29 assists in 30 games.

Double trouble in the ninth

With two picks in the ninth round, the Titan first selected right winger Xavier Lavoie (2000-03-03). The smaller sized forward spent this past season with the Quebec Cyclones at the Midget Espoir level, scoring 11 goals while assisting on 10 lamp lighters in 30 games.

Afterwards, a second goaltender made his way to the Bay as the Titan called the name of Gabriel Waked (1999-06-29). Wearing the colors of the Collège Antoine Girouard Gaulois this past season, Waked had a solid 2015-16 campaign, showcasing 14 wins, 12 losses, a 2.62 goals-against average and a .904 save percentage.

With their next two picks, the Titan acquired the rights to a pair of American born players.

Indeed, in the 11th round, Sam Rand (2000-03-08) of the Winchendon PS Wapitis became the newest Titan. A right defenseman, Rand scored one goal and added six assists in 28 match-ups with Winchendon last season.

Then, in the 12th round, Boston Junior Bruins U18 defenseman Jordan Tetreault (1998-05-05) heard his name called. The left shooting skater scored a pair of goals and had as many assists during his 18 game 2015-16 season.

In the second-to-last round, the Titan looked no further than in their own backyard, selecting the rights to forward Mathieu Blanchard (2000-02-03) whom spent this past season with the Newbridge Academy U18 team. In 28 games, he had five goals and an identical amount of assists.

And finally, with their last selection, the Titan picked Trois-Rivières, Quebec native Emery Côté-Tanguay (2000-02-21), a six foot tall center whom is a product of the Denis Francoeur Hockey Academy.

For a numbers breakdown of the Titan’s 11 selections today, please see below:

And once more, congratulations and welcome to the Bay to all of these young men!

Going into the weekend with the clear objective to improve their team in the present and in the future, the Titan can now claim “mission accomplished”.

Indeed, over the past 48 hours, the Titan have strengthen their defense with the acquisitions of veteran defensemen Olivier Desjardins and Luc Deschênes, they ended the Guillaume Brisebois saga while securing a first round draft pick for his services, added an impact 20 year-old forward and they used their first round selection this year to add a young, talented defenseman in Noah Dobson.

Titan fans can certainly begin getting excited for the upcoming season, and the team even teased that fans looking to get season tickets would be wise to wait for Father’s Day week, as a special offer may just be on the horizon.