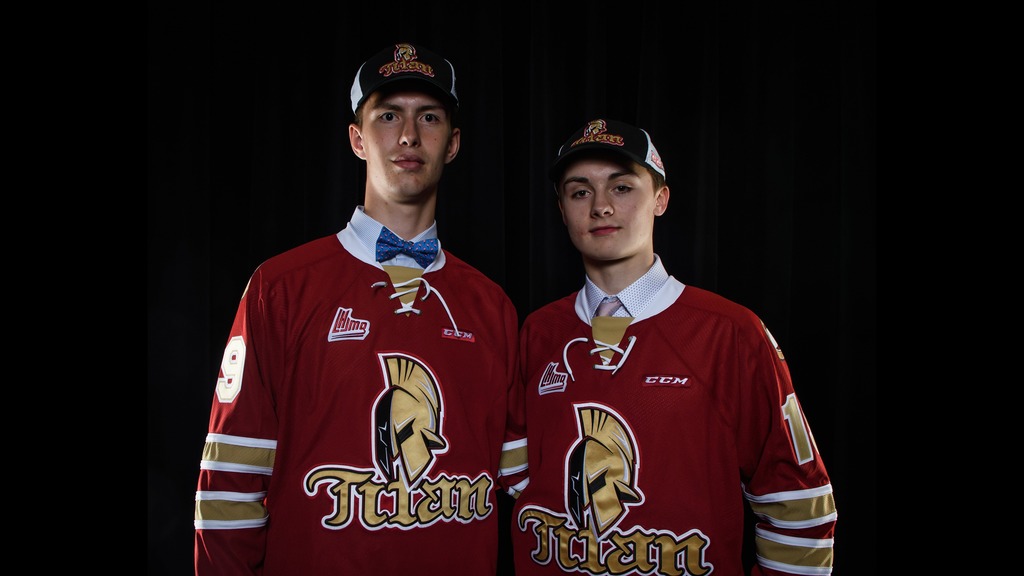 QUEBEC, Que. – The Acadie-Bathurst Titan made a total of 12 selections at the 2019 Quebec Major Junior Hockey League draft on Saturday, including four in the first two rounds.

The first came at #11 when they selected forward Riley Kidney from the Cole Harbour Wolfpack. Kidney, a product of Enfield, Nova Scotia, is the brother of Cape Breton Screaming Eagles forward Liam Kidney and had 47 points in 35 games with Cole Harbour of the Nova Scotia Major Midget AAA Hockey League. The five-foot-10, 156-pound forward also added 12 points in 10 games.

Five picks later the team took Stanstead College forward Cole Huckins with their 16th overall selection. Huckins is a six-foot-three, 181-pound forward from Fredericton, New Brunswick and could be considered as an off-the-board selection based on his third round ranking by QMJHL Central Scouting. With Stanstead College last season he totalled 27 points in 18 games. He also added nine points in five playoff games and later played for Team New Brunswick at the Gatorade Challenge where he had eight points in seven games.

At the start of round two, General Manager Sylvain Couturier completed a deal with the Chicoutimi Sagueneens to acquire the 19th overall selection in exchange for picks #29 (Round 2), #85 (Round 5), #217 (Round 13), #235 (Round 14) as well as 2020 first and seventh round picks. Bathurst also received the 94th pick (Round 6) and a 2020 sixth round selection. With the 19th pick the Titan selected Magog Cantonniers forward Tristan Roy. Listed at six-foot-one, 184-pounds, Roy totalled 21 points in 42 games and added 18 more in 15 post-season games.

Defenceman Zach Biggar was the teams second pick of round two, 27th overall. The product of O’Leary, PEI spent last season with the Kensington Wild where he racked up 28 points in 31 games. The next pick came in the third round when Dylan Champagne, a forward from the Levis Chevaliers, was taken 45th overall. With no fourth round pick, the Titan’s next selection was in round five as they nabbed forward Josh Nadeau from the Fredericton Caps.

Local product Pierre-Vincent Guignard was the first goaltender taken by the Titan going in the sixth round, 94th overall. The Titan’s seventh round pick, 109th overall, was another local player in Marc-Andre Gaudet from the Northern Moose. Forward Julien Bourget joined Magog Cantonniers teammate Tristan Roy in the Titan organization as the team took him in the eighth round. In the 10th round forward Alex-Antoine Yargeau of the Harfangs du Triolet heard his name called by the Titan. The final two selections of the day came in rounds 11 and 12 as the Titan selected American forward Logan Nickerson and Saint John Vito’s blueliner MacLaren Dick.

At the end of the day the Couturier and his staff had added eight forwards, three defenceman, and one goaltender. Five of those players were ranked in the first three rounds by the leagues Central Scouting department.

The 2019 QMJHL American Draft takes place Monday, June 10th at 10am with the Titan owning the first and 19th overall selections. Follow the team on social media for updates.