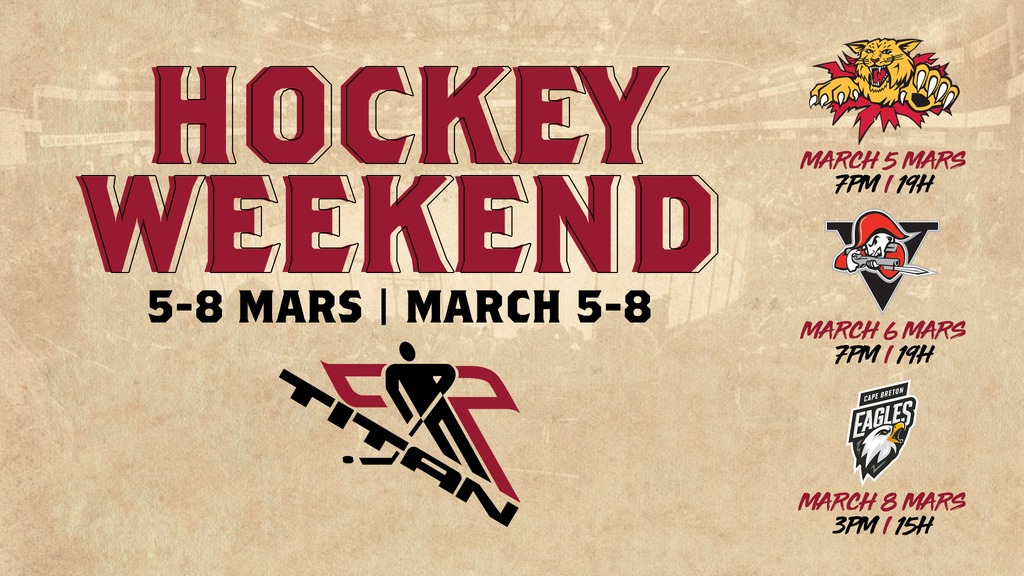 To say the least, the Acadie-Bathurst Titan are currently enjoying their best moments of the 2019-2020 campaign. Mario Durocher’s group concluded their final trip to Quebec with four points out of a possible six points, including a 4-3 victory against the Shawinigan Cataractes, Friday.

Interestingly, the Titan have now picked up at least one point in their last six games, and five of those games have ended in overtime. Forward Mathieu Desgagnés has been a key player during that stretch, having scored 11 goals in his last 7 games.

The Titan now has a record of 12 wins, 38 losses and 11 losses in overtime (35 points in 61 games) occupying the 18th and last place in the Quebec Major Junior Hockey League. They’re 12 points behind the Gatineau Olympiques for the final playoff spot.

Here are the games coming up this week as part of Hockey Weekend.

To begin their final home stand of the season, the Titan will face the Moncton Wildcats for the ninth and final time this season. Having won 15 games in a row, the Wildcats are one of the best teams in Canada with a record of 47 wins in 60 games. A big test for the Titan.

Revenge time for Acadie-Bathurst. The Voltigeurs, who defeated the Titan 4-3 in overtime last Saturday at home, will be in town for the occasion. Two points well within reach for the Titan.

An Eagles-Titan duel will complete the weekend. Like the Wildcats, Cape Breton is a contending team this year. Will the Titan surprise the Eagles for the third time this season? The answer will come Sunday evening.