Titan fall to Eagles in shootout 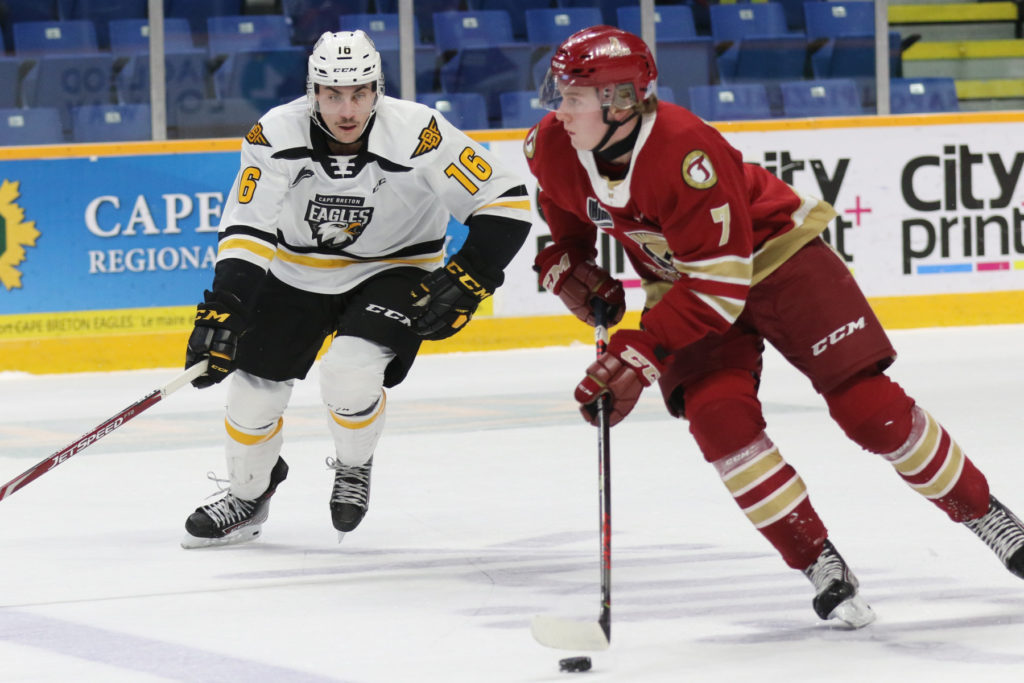 SYDNEY – The Acadie-Bathurst Titan held their own against the Cape Breton Eagles Friday night despite being 26 points behind them in the standings. Bathurst would come back to take the lead late before eventually falling in a shootout.

Ryan Francis gave the Eagles a 1-0 lead just 1:14 into the game but Olivier Coulombe finished off a 2-on-1 rush with Cole Huckins five minutes later to even it up.  It stayed 1-1 after 20 minutes of play.  Both sides had their chances in the second period but it wasn’t until the 18:51 mark that Cole Fraser broke the deadlock. The 18-year-old got his first of the season moments after exiting the penalty box.

In the third period, the Titan brought the game back to even on a powerplay goal from Remy Anglehart at 7:40. The overage forward deflected Mathieu Desgagnes’ point shot past Kevin Mandolese just three seconds into a 5-on-3 powerplay to make it 2-2. Mark Rumsey, acquired by the Titan on Thursday, scored later in the frame to give the visitors a 3-2 edge. Anglehart picked up the lone assist. The lead was short lived though, as Shawn Boudrias scored 43 seconds later to make it 3-3 and send the game to overtime.

The extra frame solved nothing so we needed a shootout. The first five shooters failed to score but the sixth made to mistake. Derek Gentile netted the game-winner giving the Eagles a 4-3 victory. Titan goaltender Felix-Anthony Ethier was named third star with 35 saves in the loss.