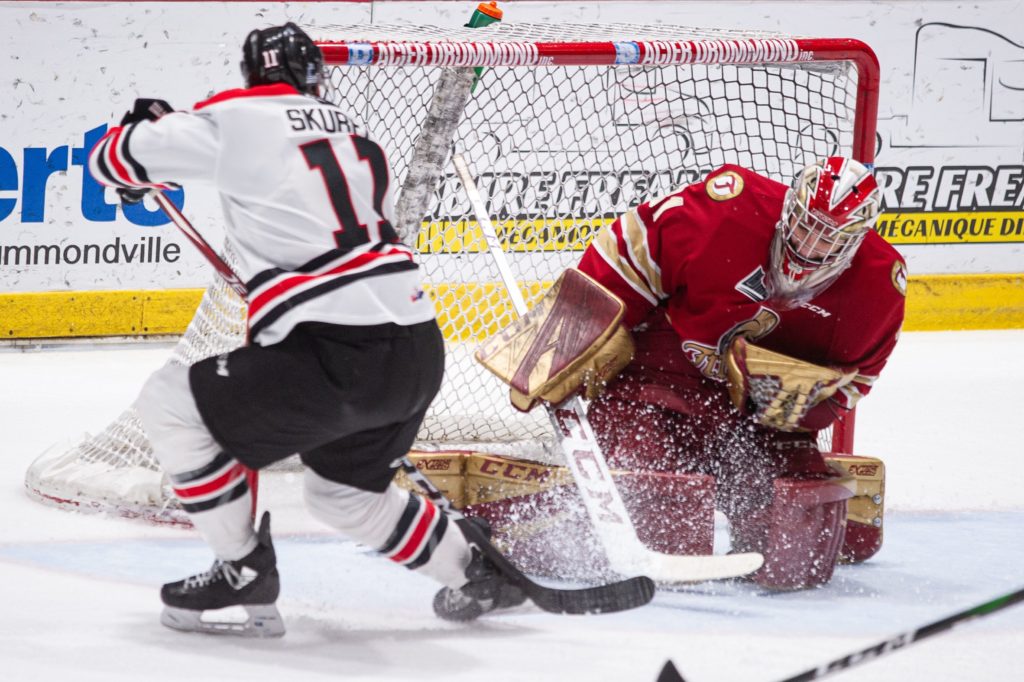 DRUMMONDVILLE – For the second night in a row the Acadie-Bathurst Titan made a third period comeback to force overtime, however this time the end result was not the one they wanted as they dropped a 5-4 decision to the Drummondville Voltigeurs.

The Voltigeurs were all over the visitors in the opening 20 minutes of play scoring three goals straight goals near the middle of the period. William Dufour opened the scoring at 8:05 followed by goals from Jeremy Lapointe and Nicholas Girouard to make it 3-0. Mathieu Desgagnes cut the Titan deficit to two with 27 seconds remaining in the period on a pretty tic-tac-toe play with Riley Kidney and Logan Chisholm.

Charlie Da Fonseca restored a three-goal lead for the Voltigeurs midway through the second period but Logan Chisholm roofed one on Francesco Lapenna four minutes later to make it a two-goal game once again. It stayed 4-2 after 40 minutes of play. The Titan came out hungry in the third and quickly got to work on a comeback. Desgagnes scored his second of the game and 26th of the season at 4:25 and Cole Huckins netted the equalizer at 19:15. Both goals came on the powerplay with Yan Aucoin grabbing helpers on each one. Desgagnes and Remy Anglehart got the others.

Late in overtime Nicholas Girouard came off the bench while the Voltigeurs had possession in the offensive zone, received the puck and fired a shot short side on Felix-Anthony Ethier to lift the home team to a 5-4 win. With two goals and an assist Mathieu Desgagnes surpassed the 100 point plateau while Cole Huckins was named third star of the game with one goal.