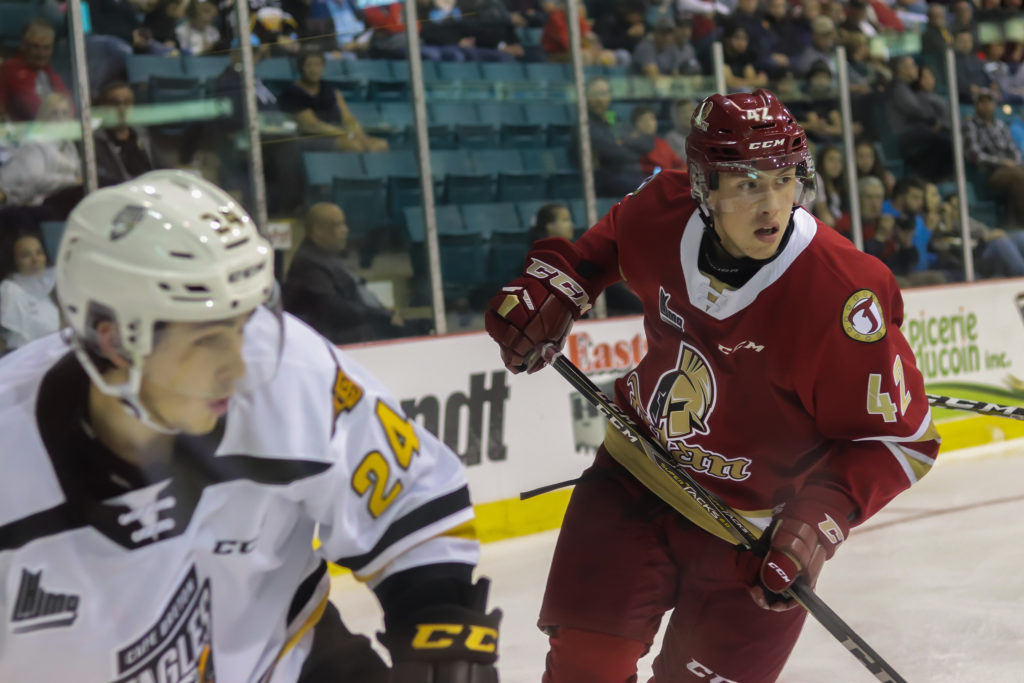 The Acadie-Bathurst Titan kicked off the 2019-20 Quebec Major Junior Hockey League season with a pair of games against the Cape Breton Eagles at the K.C. Irving Regional Centre last weekend.

A crowd of over 2,600 fans were on hand on Friday as the Titan battled the Eagles down to the wire in a 3-1 loss in their home opener.  An empty net goal from Egor Sokolov, his second of the night, spoiled an outstanding debut by Titan netminder Tristan Bérubé.  The 20-year-old La Pocatière, QC native, who was picked up in a trade with Rimouski last month, turned aside 36 shots as the Eagles outshot the Titan 39-30.

Liam Kidney scored the other goal for Cape Breton, while veteran Kevin Mandolese was in net for the win.

Titan captain Shawn Element got off to a strong start with his new team picking up the lone goal for Acadie-Bathurst, a shorthanded effort, midway through the opening period.  Acquired in a trade with Baie-Comeau last June, the 19-year-old Victoriaville, QC native, was voted captain by his Titan teammates during training camp.  Unfortunately his night was cut short just over four minutes into the second period.  After colliding with Cape Breton forward Mathias Laferrière at the side of the Titan net, Element was challenged to a fight following the ensuing faceoff by Eagles veteran Shawn Boudrias resulting in the ejection, and subsequent one game suspensions, of each player.  Laferrière fell awkwardly into the boards after the hit from Element and had to be helped from the ice suffering an apparent shoulder injury which sidelined him for the rest of the weekend series.

On Saturday, the Titan battled back from a 6-1 deficit with a pair of third period goals before ultimately dropping a 6-3 decision to the Eagles.

Rookies Riley Kidney and Cole Huckins each potted their first ever Quebec Major Junior Hockey League goals in the loss, while 20-year-old defenceman Yan Aucoin rounded out the scoring for Acadie-Bathurst with a blast from the point early in the second period.  The L’Étang-du-Nord, QC native was also playing his first game with the Titan after being picked up in a trade with Baie-Comeau last June.

Bérubé got the start in goal once again for the Titan, stopping 40 of 46 shots in front of 1,700 fans at the Irving Centre for a rare Saturday matinee game.

William Grimard was in net for Cape Breton for the win, stopping 23 of 26 Titan shots.  Scoring for Cape Breton in the win were Brooklyn Kalmikov and Nathan Larose, each with a pair, while singles went to Adam McCormick and  Jarrett Baker.

The Titan have a few days off before heading on the road this weekend for a pair of games against Maritime Division rivals.  On Friday they travel to Moncton for a 7 p.m. start against the Wildcats at the Avenir Centre.  Saturday they’ll make their way to the Nova Scotia capital for a 7 p.m. game with the Halifax Mooseheads.