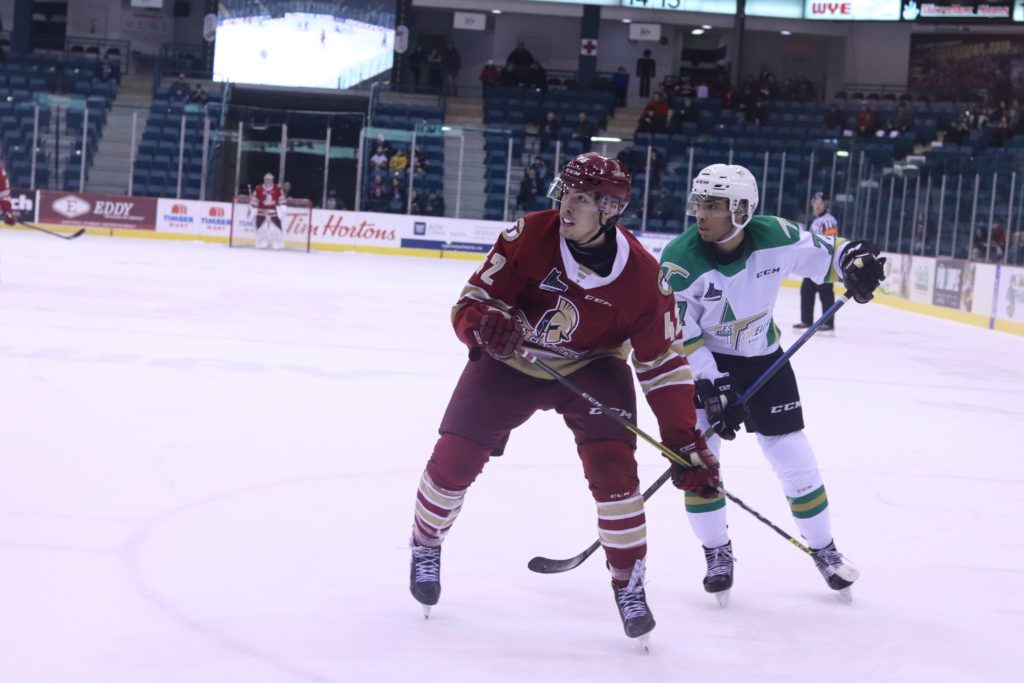 BATHURST – After travel conditions kept the Foreurs from getting to Bathurst on time and forced the game to be delayed by 45 minutes, the Acadie-Bathurst Titan and the Val-d’Or Foreurs hit the ice at the K.C. Irving Regional Centre on Saturday night.

The Titan got off to a great start and jumped ahead early in the shots category 7-2. However, the Foreurs got their legs under them and were able to take a 1-0 lead midway through the first period. With under four minutes to go in the frame Evan MacKinnon got one past Jonathan Lemieux to even the game at one goal apiece and end his lengthy goal-less drought. Anderson MacDonald and Shawn Element picked up the assists while the game remained tied after one.

Remy Anglehart scored a shorthanded goal 12:57 into the second period to give the Titan their first lead of the game, with assists going to Shawn Element and Benjamin Roode. Val-d’Or would respond not long after to tie the game back up, 2-2. It stayed that was through 40 minutes of play. Things started to go downhill early in the third period as the Foreurs scored twice in the first four minutes to take a 4-2 lead. Goals were scored by Marshall Lessard and Emil Lessard-Aydin, both of which Tristan Berube would surely like to have back. Justin Robidas added another at the eight minute mark to extend the lead to 5-2. The Titan weren’t ready to quit just yet though. Anderson MacDonald ripped one past Jonathan Lemieux at 12:45 on the man advantage and Harijs Blants scored with a heavy slapshot at 15:23 to cut the deficit to one. MacDonald’s 10th of the season was assisted by Brants and Berube while Olivier Coulombe and Nicolas Kingsbury-Fournier got the helpers on Brants’ second of the campaign.

After MacDonald hit the cross bar at one end in the final minute of play, Peyton Hoyt got the puck going the other way and scored into the empty net to make it a 6-4 final score in favour of the Foreurs.