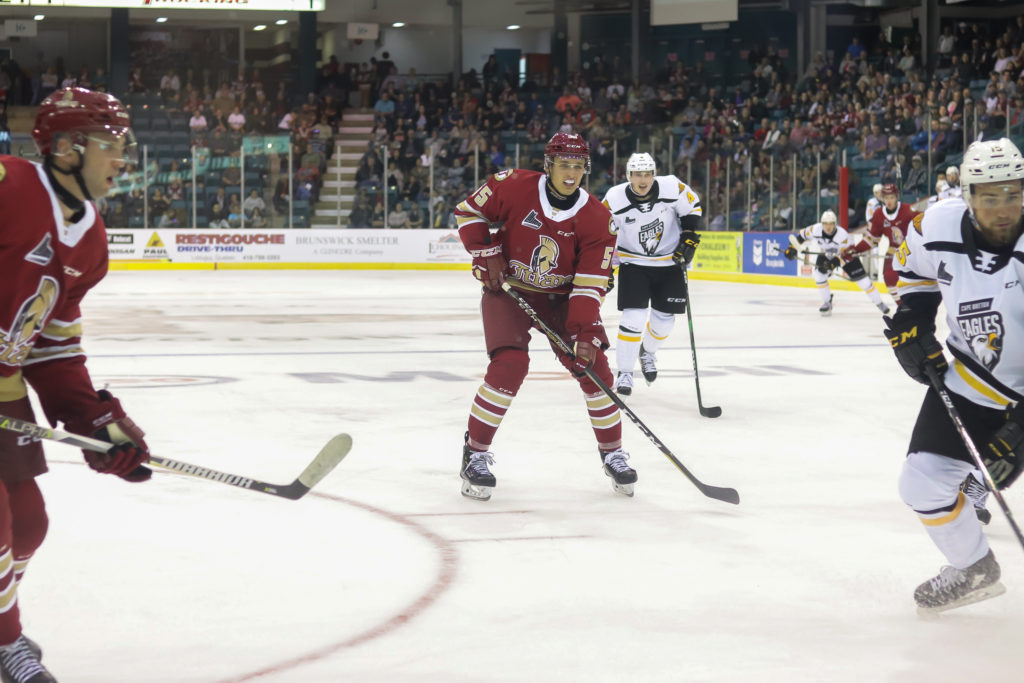 BATHURST – The Acadie-Bathurst Titan opened the 2019-2020 season Friday night as they played host to the Cape Breton Eagles at the K.C. Irving Regional Centre in what was their home opener.

Cape Breton got an early man advantage just 24 seconds into the game after Shawn Element was called for interference. However, the Titan penalty kill was successful in killing it off and keeping the game scoreless. That changed at the 8:18 mark when Egor Sokolov jumped on a rebound to beat Tristan Berube and open the scoring. Exactly four minutes later, with the Eagles back on the powerplay due to a tripping call to Benjamin Roode, the Element got a breakaway and made no mistake beating Kevin Mandolese backhand to even the game at one goal apiece. The Titan captains first of the season was assisted by Logan Chisholm and Cole Larkin.

It took all of two minutes for Cape Breton to regain the lead thanks to Liam Kidney, the brother of Titan rookie Riley Kidney. The goal came at 14:20 and would stand up as the game-winner when all was said and done.

No goals were scored in the second period but the penalties were abundant. Element and Shawn Boudrias dropped the gloves at 4:03 and were both given five for fighting as well as a game misconduct for a staged fight. At the 6:52 mark, Titan forward Evan Mackinnon was hit from behind by Cape Breton’s Shawn Miller and the two immediately dropped the gloves. Miller received five for fighting and a two minute penalty for roughing while Mackinnon got five for fighting as well as two minutes and a 10-minute misconduct for instigating. When the buzzer sounded, 42 minutes in penalty had been handed out in the second period alone.

The only scoring in the third period was an empty net tally from Sokolov with 1:34 remaining to seal the victory for the visiting side 3-1 over the Titan. Despite picking up the loss, Tristan Berube made 36 saves and was named first star of the game in his regular season Titan debut. Sokolov was second star and Anderson MacDonald picked up third star honours.