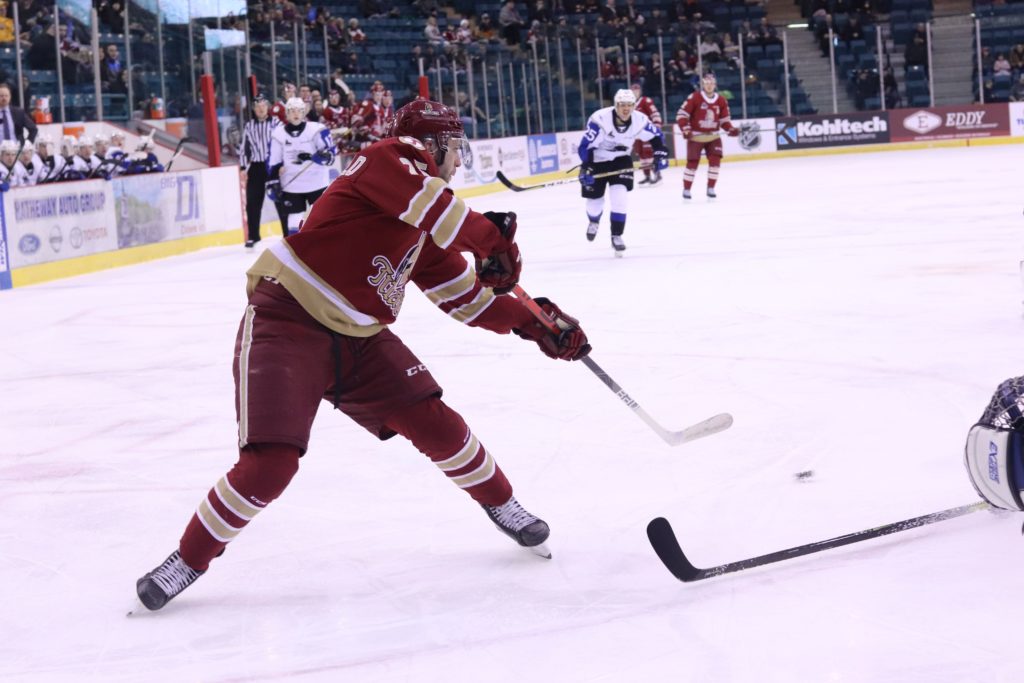 BATHURST – The Acadie-Bathurst Titan returned to action Saturday afternoon after the two week christmas break. In town for a 4pm puck drop was the Saint John Sea Dogs, who had defeated the Titan 6-3 in their last meeting prior to the break.

It was a different story in this one and it started 8:27 when Mathieu Desgagnes opened the scoring. It was a 2-on-1 break that saw Anderson MacDonald wait out the Sea Dogs defender and slide the puck cross-ice to Desgagnes who made no mistake for his eighth of the campaign. That would be the only tally in the opening period of play as the Titan lead 1-0.

The lead was doubled 12:26 into the second period when Cole Huckins banged home the rebound off a shot from Riley Kidney making it 2-0. MacDonald picked up the other helper. Saint John got on the board four minutes late thanks to a powerplay goal from Ben Badalamenti. Not long after that the Titan notched a powerplay goal of their own and it was MacDonald firing a one-timed shot past Zachary Bouthillier to extend the lead to 3-1. Remy Anglehart’s 15th of the season pushed the score to 4-1 before the end of the frame.

In the third period Jeffrey Durocher gave the Sea Dogs a glimmer of hope beating Tristan Berube at 12:42 and cutting their deficit back to two goals. However, Anglehart added an empty netter with two minutes remaining to put the finishing touches on a 5-2 Titan win. MacDonald finished the night with four points to earn first star of the game while Mathieu Desgagnes was named second star and Harijs Brants picked up third star honors.