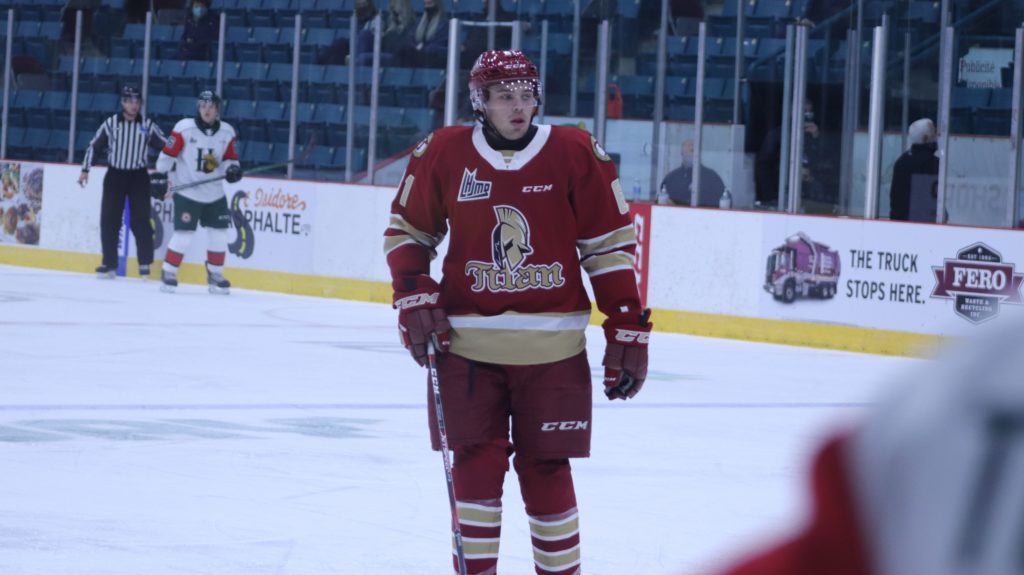 BATHURST – The Acadie-Bathurst Titan were back in action Sunday as they battled the Halifax Mooseheads for the first time this season. Coming off a shootout loss to Saint John on Friday, the Titan looked to get back in the win column.

After a scoreless first period that saw Halifax outshoot the home team 9-8, the Titan opened the scoring early in the second. Just over two minutes into the period, David Doucet received a pass from Ben Allison on a 2-on-1 and went five-hole on Mooseheads rookie netminder Brady James. The Mooseheads quickly responded to tie the game 1:20 later on Jordan Dumais’ second of the season.

Two minutes later Bennett MacArthur restored the Titan lead with his third of the season off a great pass from Riley Kidney. Logan Chisholm picked up the other assist. Not long after Ben Allison scored on a no-look pass from Mark Rumsey for his first goal of the season giving the home side a 3-1 advantage. The eventual game-winning goal came at 11:39 when Alexis Dube netted his first of the campaign after forcing a turnover on the forecheck. Dylan Champagne picked up an assist, his first career point, while Yannic Bastarache had the other. Jason Horvath cut the Mooseheads deficit to two at 12:19 getting a point shot through a crowd in front.

Seven minutes into the third period another Mooseheads rookie found the back of the net as James Swan made it 4-3. However, 30 seconds later MacArthur added his second of the game to put the Titan back in front by two. The 19-year-old completed his first career hat trick on the powerplay with 1:29 remaining to make it a 6-3 final score. MacArthur was named first star of the game while Chad Arsenault’s 32 saves earned him second star of the game. Riley Kidney was the game’s third star with two assists.