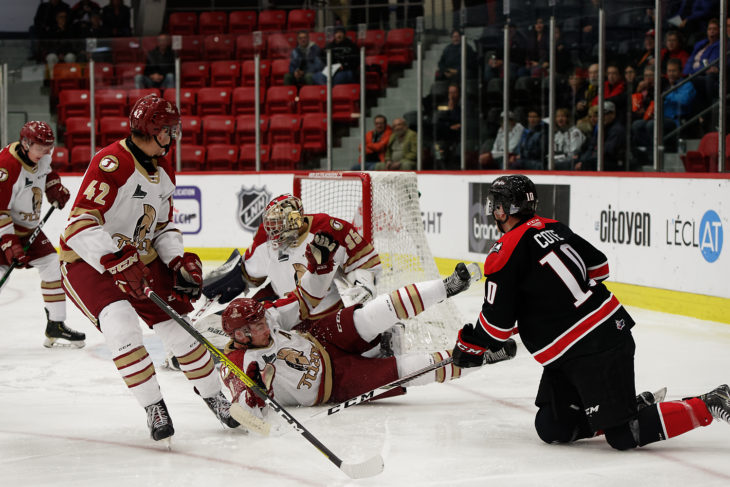 ROUYN-NORANDA – The Acadie-Bathurst Titan began their first Quebec road trip of the year Thursday night when they visited the Rouyn-Noranda Huskies at the Iamgold Arena. After being down by two goals through 40 minutes, the Titan came back to tie the game before eventually falling to the Huskies 5-3.

Slovakian forward Adrian Valigura drew first blood for the home team 6:08 into the game with his third of the season. Later in the period Anderson MacDonald got a stick on Riley Kidney’s shot from the high slot for his sixth of the campaign tying the game 1-1. Harijs Brants also picked up an assist on the play, his first career point. The shots favoured the Titan 11-9 after one period but the score was deadlocked at one.

The Huskies scored twice in the first four minutes of the middle period to grab a 3-1 lead. First it was Olivier-Luc Hache with a powerplay tally at 2:37 before Justin Bergeron netted one at 4:17. That’s were things would stand through 40 minutes of play. Seven minutes into the third, with Olivier Coulombe in the box for hooking, Shawn Element fired a low shot just inside the far post to cut the Titan’s deficit to one goal. Jeremy Diotte notched the lone helper on the captains fifth of the season. A minute later Cole Huckins potted the equalizer, his fourth, assisted by Nicolas Kingsbury-Fournier and Logan Chisholm. Unfortunately, Alex Beaucage would score the game winner at 15:48 to make it 4-3 followed by an insurance marker from Alex Labbe to make it a 5-3 final score.