Lafrance, Belgarde excited for a new chapter with Titan 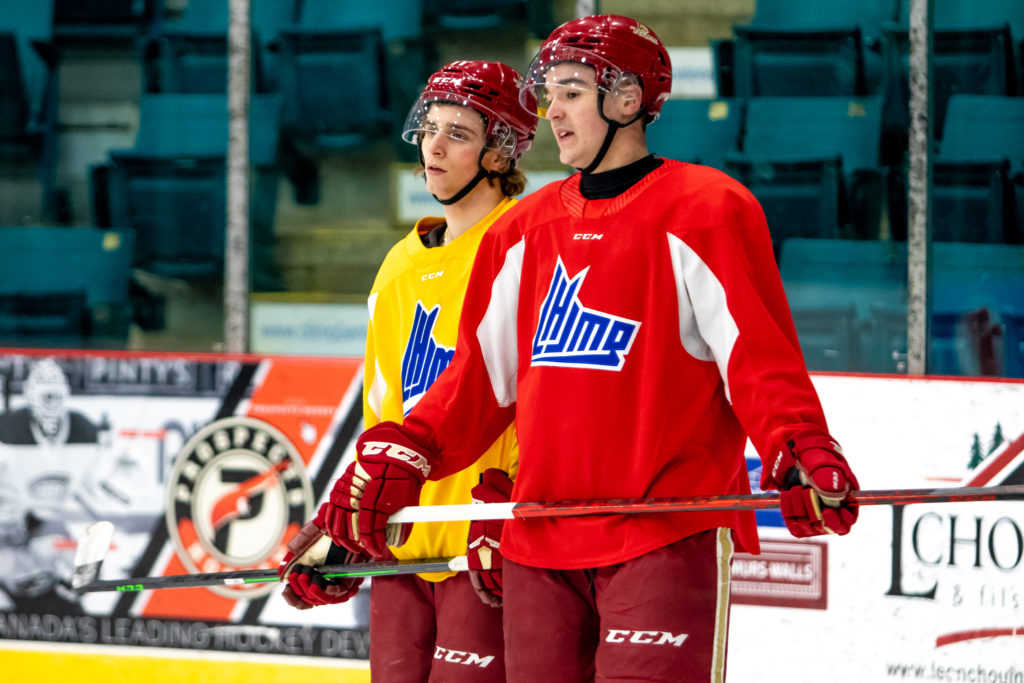 Felix Lafrance and Thomas Belgarde are looking forward to hitting the ice together once again when the puck drops on the second half of the major junior season. But, instead of suiting-up with the Chicoutimi Saguenéens, the two Quebec-born forwards will wear the Acadie-Bathurst Titan logo for the first time in their career.

It’s a welcome step in their quest to hoist the President Cup and Memorial Cup trophies this season. “We have a good team [and] we have a chance and it’s not the same situation in Chicoutimi this year,” said Lafrance. “I’m pretty excited.”

Titan general manager Sylvain Couturier made a series of moves once the Christmas trade period opened to bring Lafrance and Belgarde to the team. “The addition of Lafrance, a highly skilled offensive player that can also play on the PK, and Belgarde, an excellent player all over the ice with one of the best faceoff percentages in the QMJHL, will be more than beneficial for the team,” said Couturier.

Lafrance and Belgarde will join Acadie-Bathurst alongside former teammate and Washington Capitals prospect Hendrix Lapierre, who was drafted first overall in the 2018 Quebec Major Junior Hockey League Entry Draft by Chicoutimi and played there for three seasons. Lafrance said it feels “pretty nice” to play alongside Belgarde and Lapierre.

“It’s easier to, like adapt with a new team. Thomas was one of my good friends this year on the team and then Hendrix is such a good guy,” he said. “And, he’s a very good player, so, it’s nice to play with him. I think it’s pretty fun to play with those guys again.”

Drafted 24th overall in the second round of the 2017 draft by the Armada, Lafrance has called Blainville-Boisbriand, Cape Breton, and Chicoutimi home in the five seasons he’s played major junior. He has a career total of 60 goals and 83 assists in 178 games at +39 and two playoff appearances. To date Lafrance is ranked first among skaters across the league. Originally from Saint-Eustache, Que., the right-winger has 23 goals and 27 assists for 50 points at -4 this season while sitting second in goals and fifth overall in assists.

“I was playing good in Chicoutimi this year and my goal is to continue in Bathurst. I want to have success with the Titan and my goal is to win the cup this year,” he said. “So, I think I’m going to have to bring my 100 per cent game to the team.”

Belgarde played for Chicoutimi from 2019 until the recent trade to Bathurst. Drafted 220 overall in the 13th round of the 2018 draft by the Sagueneens, the product of Saint-Blaise-sur-Richelieu, Que. has a career total of 25 goals and 27 assists for 52 points at plus-nine.

Since the puck dropped this season, he has 12 goals and 19 assists for 31 points at plus-six in 30 games. Standing six-feet and weighing in at 199-pounds, the defensive centreman said he’s an “all-around player” who will bring that skill set to the team. Becoming a member of the Titan is exciting.

“We all know that we have a good team, so I expect nothing but the cup. You know, I just want to win,” Belgarde said. “I’m excited to join the team because I know we’re able to win and I hope we will win.”