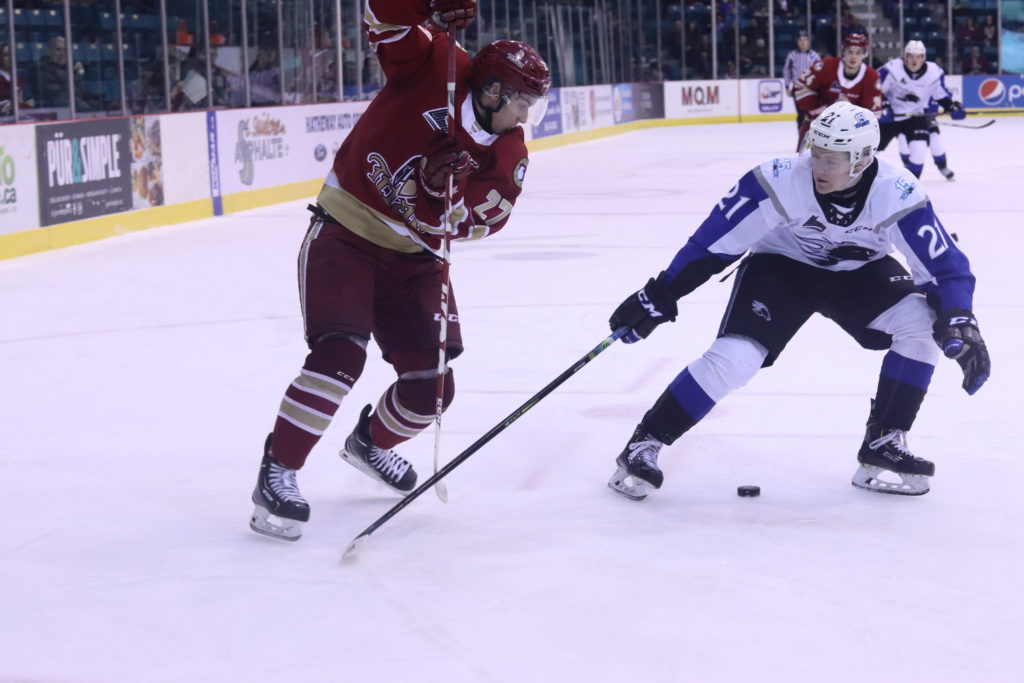 BATHURST – A bad start proved costly for the Acadie-Bathurst Titan as they suffered a 4-3 loss to the Saint John Sea Dogs on home ice Saturday night.

Things started to go downhill early for the Titan and the visitors took advantage. A turnover by the home team turned into a break for Sea Dogs captain Nicolas Guay and he made no mistake for his eighth of the season at 6:29. Six minutes later Dawson Stairs scored after yet another Titan turnover to make it 2-0. Saint John outshot Bathurst 14-12 in the opening period and maintained a two-goal advantage into the break.

Midway through the second period the Titan scored two quick goals to erase the two-goal deficit. Anderson MacDonald scored his ninth of the campaign off a beautiful pass from Remy Anglehart to make it 2-1. 36 seconds later Yan Aucoin blasted his sixth of the season past Noah Patenaude to even the score at two goals apiece. Riley Kidney and Logan Chisholm picked up the assists. However, the game didn’t stay tied long. Nicolas Guay found Jordan Spadafore trailling on an odd-man rush and the Sea Dogs defenceman fired it past Tristan Berube to put Saint John back in front 3-2. That would be the score after 40 minutes of play.

Guay added his second of the night just 1:15 into the third period giving the Sea Dogs their second two-goal lead of the game 4-2. A hooking penalty to Charlie Desroches near the middle mark of the period opened the door for the Titan to get back into the game. Harijs Brants stepped into a heavy slapshot and beat Patenaude for his first career goal to bring the Titan back to within one with Riley Kidney and Noah Delemont getting the helpers. Unfortunately, that is as close as the Titan would come as the Sea Dogs hung on for a 4-3 win.