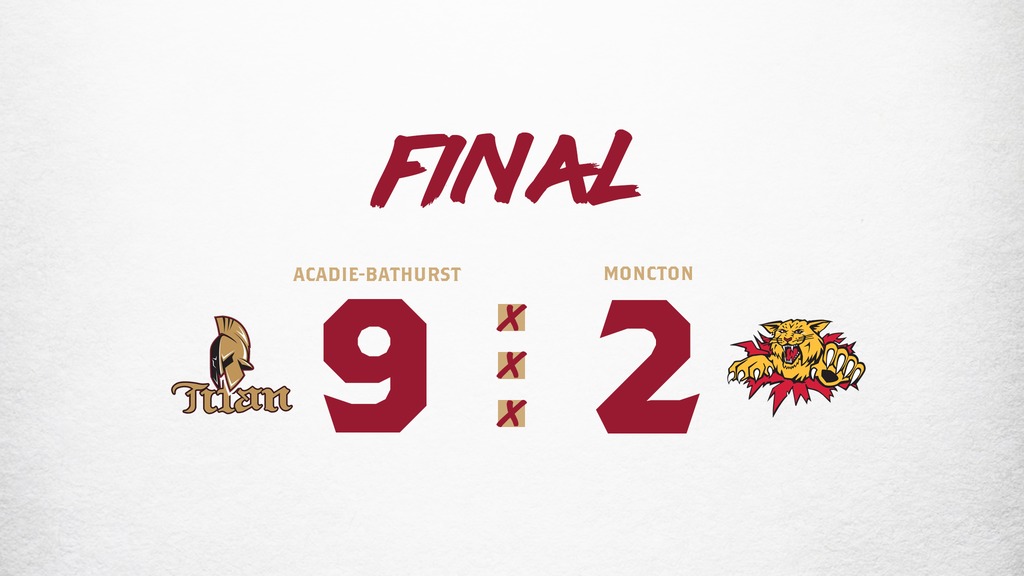 MONCTON, N.B. – The Acadie-Bathurst opened the 2019 pre-season on the road Sunday afternoon as they visited the Superior Propane Centre for a showdown with the Moncton Wildcats.

A rookie-laden Titan lineup went to work early taking a 3-0 lead in the first 10 minutes of the game. Philippe Fortin got things going 1:30 into the game as he fired a point shot past the Wildcats goaltender to open the scoring. Yannic Bastarache and Riley Kidney picked up the assists. Adam Fiore got a stick on a Neil MacLean point shot and it found the back of the net. MacLean and Fortin got the helpers at 7:32. A little over two minutes later Maxime Rioux extended the lead to 3-0 assisted by Robbie Dowell.

Dowell potted a goal of his own at the 13:11 mark to round out the first period scoring. Olivier Coulombe had the lone assist on the powerplay tally. Mark Rumsey got the home side on the board 4:48 into the second cutting the Titan lead to 3-1 but a late period goal from Alexis Dube restored a three-goal edge for the visitors through two periods.

Dominic Leblanc scored shorthanded just eight seconds into the third to once again bring the Wildcats to within two. However, that’s as close as they would come as Dube netted his second of the game at 3:41 making it 5-2. Dylan Champagne nabbed an assist on the goal. Dube would complete the hat trick with two minutes to play with assists to Zachary Racicot and Yannic Bastarache. Bennett MacArthur added to the damage at 18:39 with an unassisted marker before Dube rounded things out with his fourth goal of the game with 20 seconds remaining. When the buzzer sounded the scoreboard read 9-2 in favour of the Titan.