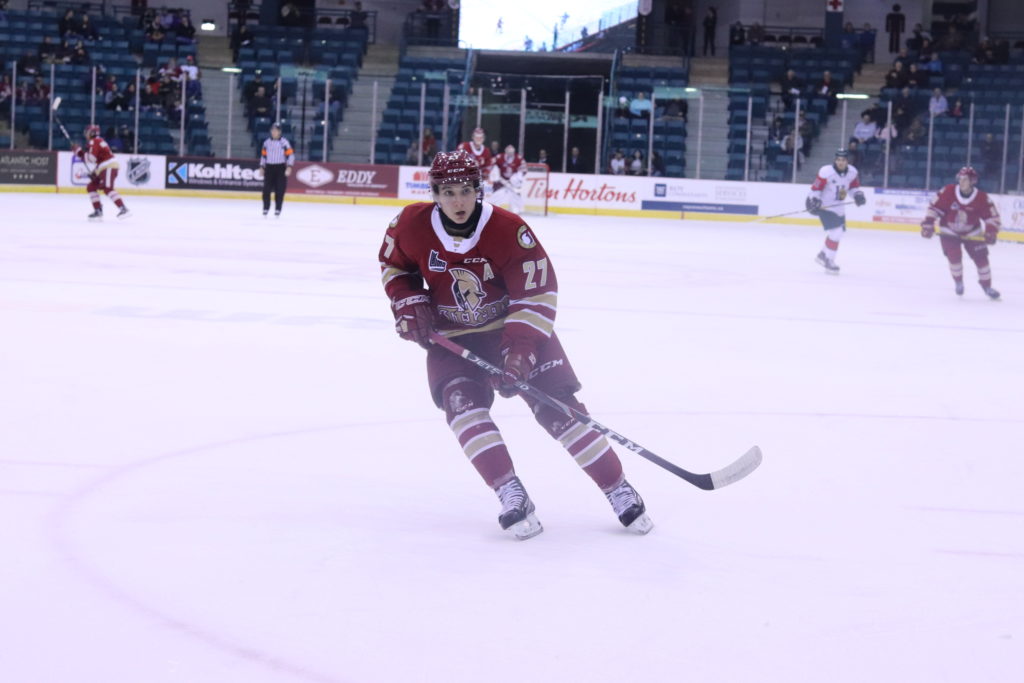 SHAWINIGAN – Following back-to-back overtime losses last weekend, the Titan were finally able to pick up a victory in the extra frame as they completed a third period comeback to top the Shawinigan Cataractes 4-3 Friday night at the Centre Gervais Auto.

Seven minutes into the game Bennett MacArthur picked up the puck in the slot, turned and fired past Charles-Antoine Lavallee to give the Titan a 1-0 edge. Cole Huckins had the lone helper on MacArthur’s seventh of the year. The Cataractes would tie it up just past the 12 minute mark as William Veillette collected a rebound at the top of the crease and tapped it into the open cage.

Shawinigan took the lead midway through the second period when Felix-Olivier Chouinard beat Tristan Berube with a slap shot on the powerplay. Through 40 minutes of play it was the home side leading 2-1. Marc-Antoine Pepin extended the lead with a shorthanded marker at 7:12 of the third period as the puck deflected off a Titan player in front and through Berube’s legs. The Titan got back within one three minutes later on a powerplay goal from Mathieu Desgagnes. His 23rd of the campaign was assisted by Yan Aucoin and Riley Kidney. At 12:10 Remy Anglehart finished off a pass from Ben Allison one-timing it past Lavallee to even it up 3-3. At the end of the third the score remained tied at three and we were off to overtime.

A hooking penalty to Riley Kidney 1:47 into overtime put the Titan shorthanded 4-on-3. Shawinigan put four forwards on the ice looking for the win but it would come back to bite them. Desgagnes forced a turnover late in the penalty to Kidney and beat Lavallee on his backhand to give the Titan a 4-3 win in the first game of their three-game road trip. Tristan Berube made 34 saves to get the win in his 150th career game.