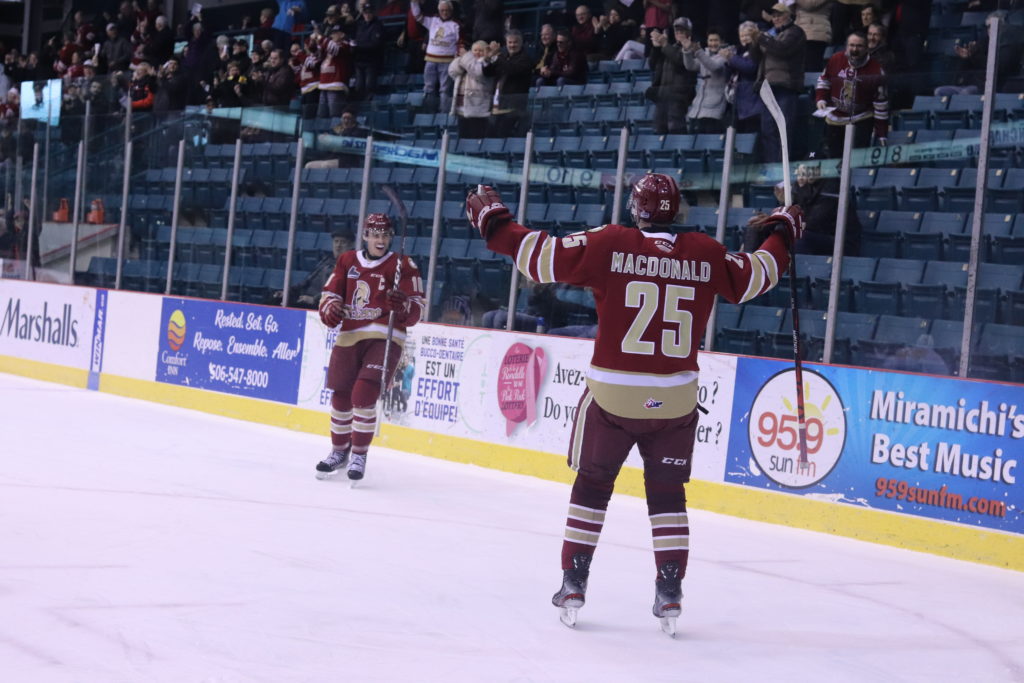 BATHURST – Returning home from a long road trip, the Acadie-Bathurst Titan welcomed the Cape Breton Eagles to the K.C. Irving Regional Centre. It was the first visit to Bathurst for the Eagles since opening weekend when they defeated the Titan in back-to-back games.

It would end up being a much different result this time around. Bennett MacArthur scored his first career goal on a breakaway 2:16 into the game to break the scoreless tie. Evan MacKinnon and Nicolas Kingsbury-Fournier picked up the helpers as the Titan grabbed an early 1-0 edge. They would extend the lead late in the first period thanks to captain Shawn Element. It was a 2-on-1 breakaway that resulted in one-handed pass from Anderson MacDonald over to Element who beat Kevin Mandolese for his 18th goal of the season. The opening 20 minutes would come to a close with the home team leading 2-0.

The Eagles got one in the second period to come within one as Brooklyn Kalmikov’s shot squeaked through Tristan Berube and into the net. That was the lone tally in the middle frame as the Titan remained in front 2-1 through two periods. 6:23 into the third period Remy Anglehart netted his 15th of the campaign to give the Titan some insurance and a 3-1 lead. Six minutes later the 20-year-old found the back of the net once again off a rebound to give the home team a three-goal cushion. Cole Huckins and Anderson MacDonald got the assists on both Anglehart goals. Element would add an empty net late in the game to put the finishing touches on a 5-1 victory.

Tristan Berube was the first star of the game with 29 saves while Anglehart and MacDonald were named second and third star respectively.