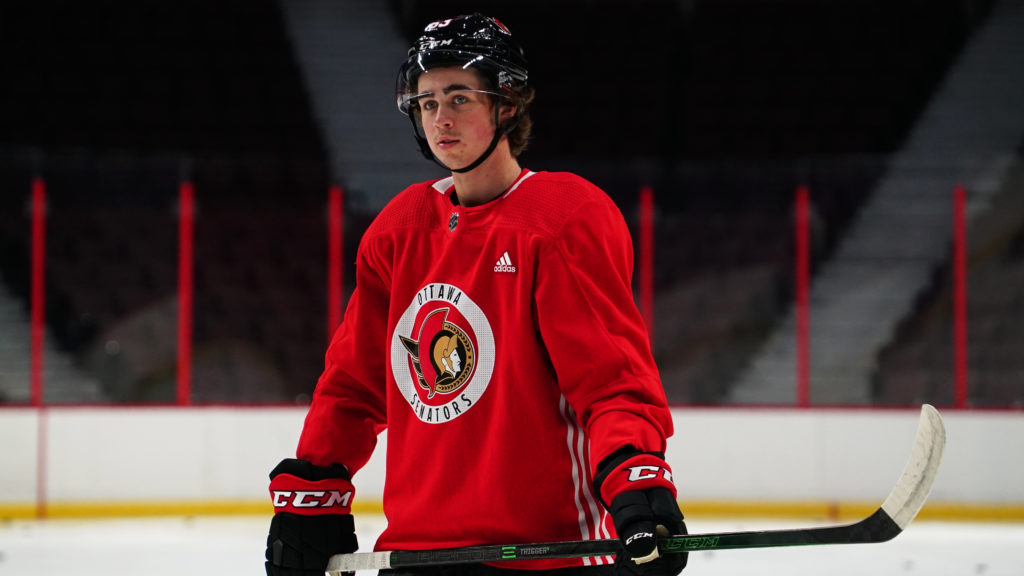 Following his time at the Ottawa Senators 2021 rookie camp, Ben Allison is ready to put his experiences to good use as he takes on a bigger role for the Titan this season. The six-foot-two, 180-pound left-winger from Halifax, N.S. is in his third season in the Quebec Major Junior Hockey League.

“Everyone was treated like a professional and it really had gave me a chance to open my eyes a little bit more and see what I need to learn and what I need to do to get to the next level.” Putting on an NHL jersey in the exhibition game makes the highlight reel of memories from his time with the Sens. “I found that kind of what my whole life what I’ve been working to, obviously it wasn’t a regular season game. But, I still got to put on a jersey and wear it for the first time,” he said. “I found that was awesome.”

Since the puck dropped on the 2021-22 QMJHL regular season, Allison has registered two goals and an assist in five games. As to what he hopes to achieve this season with Acadie-Bathurst, Allison said the goal is a deep playoff run.

“I think the main goal is probably pretty similar with all the guys,” he said. “I want to go far in the playoffs and hopefully make a run for the Memorial Cup. Personally, I think I want to try to get to another camp at the end of the year. And I think if I have a good year anything’s possible. So, I just want to keep working towards that goal.”

Catch Ben Allison and the rest of the Acadie-Bathurst Titan in action this weekend for back-to-back home games. Saturday the team hosts the Moncton Wildcats at 4pm before the Charlottetown Islanders come to town Sunday at 3pm.

Here’s a quick Q&A from his time with the Senators:

Q: What was the experience like at Ottawa’s rookie camp?
A: It was unbelievable. I found it amazing. Really eye-opening to see how crazy everyone was and how awesome, how hard everyone has to work to get to that spot. And how big of a push you need to make and sacrifice you need to make to get to the next level.

Q: What was your biggest take away from your time with the Sens?
A: I would say how well everyone prepares their body and takes care of their body. It’s really their job, so they need to make sure that their body’s healthy 99.9 per cent of the time.

Q: How did it feel to be a handful of Titan players attending various NHL rookie camps?
A: It was awesome. I mean I knew we had a strong group of kids last year at the end of it. But, it was really cool and I was really excited for all the guys to come back and share their experiences with me. So, I thought that was unbelievable.

Q: How do you feel this experience will help the Titan this season?
A: I think it’ll just give us more confidence and experience throughout the year and especially when it gets later in, we’ll be able to take care of our bodies and take away what we could from the camps. And then hopefully that helps us so we can go for a long run in the playoffs.

Q: What is your own personal goal this season?
A: I really want to get another NHL invite or draft depending on what happens. I think that would be awesome for me. I know I have a lot to work on and coming back from the camps, I know what I took away from it and what I need to work on. So, I feel like that’s my goal.

Q: What is your team goal?
A: The team goal is obviously to go for a long run in the playoffs and hopefully win the Memorial Cup.

Q: What skill set do you bring to the Titan?
A: I bring a strong offensive ability with a lot of skill and a good goal scoring ability.

Q: What were you looking forward to the most about returning to Bathurst?
A:  I guess just being able to be in the rink with all the fans and having everyone back and seeing everyone around the rink. I think that was the most important thing for me, especially missing out. We still had fans last year, luckily, but now that we can hopefully pack the rink it would be awesome.

Q: What is your favourite thing about being a Titan?
A: I would say the close connection between the guys and the loyalty of the fans.

Q: If you could describe this year’s team in one word, what would it be?
A: Resilient.